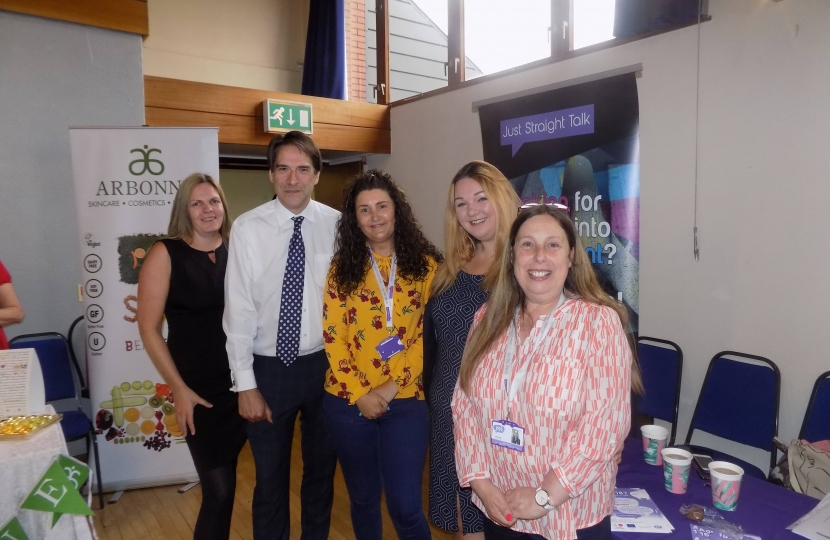 Nearly 500 hundred jobseekers flocked to the 6th Halesowen & Rowley Regis Jobs and Skills Fair, organised by local MP James Morris and Jobcentreplus, at Cornbow Hall in Halesowen. This was the 11th jobs and skills event James has organised since 2010.

National companies like HSBC, and Barclays were joined by well-known local employers, including Waldron's Solicitors, Pertemps and Trinity Personnel.

There was also careers advice available from the The Apprenticeship Works and Halesowen College, as well as organisations offering basic skills training and entry-level qualifications to help people into work.

James Morris thanked the exhibitors and jobseekers who attended for making the event such a success:

“Even though local unemployment is lower than in 2010, we still need to do everything possible to help people in Halesowen& Rowley Regis to find work and to gain the skills and qualifications they need to build careers.

“These Jobs Fairs are a useful way of bringing local people who are looking for work or training face-to-face with businesses and training providers who have opportunities on offer.

“I spoke to all of the companies and know how impressed they were with the quality of the people at the Jobs and Skills Fair, and that many are already planning to interview jobseekers they met at the event.”

Let’s pull together to defeat Coronavirus

There is no doubt we are now facing a great challenge over the coming weeks and months where our everyday lives will change. Many of us will never have experienced the measures that our country are taking, and I appreciate that many people will be very anxious at this time.