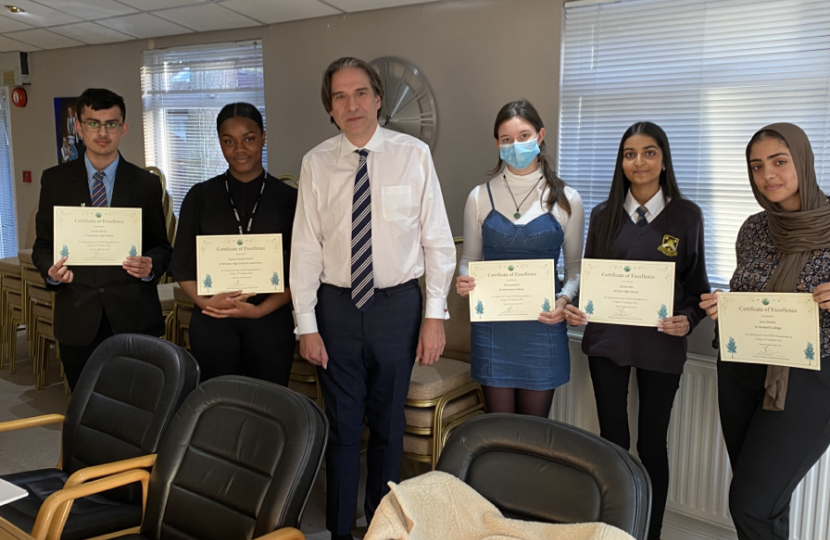 James brought together local students and environmental stakeholders on Friday 15th October, as they discussed the forthcoming COP26 Summit on Climate Change and what they hope world leaders can agree on.

The UK will be hosting the Summit in Glasgow from 31st October to 12th November, and given its significance for the future of the plant, James decided to bring together representatives from local Friends Groups to discuss the key environmental challenges.

James also ran a competition for local students to win a place at the Roundtable, by submitting a piece of writing setting out what they do to help the environment, what they hope COP26 will achieve and what they hope the planet will look like by 2050. After the Roundtable, James presented them with certificates and thanked them for their participation. The five winners were Ellie Batsford (Halesowen College), Naomi Oviawe David (Windsor High School & Sixth Form), Joshan Khela (Leasowes High School), Davina Rai (Earls High School) and Sara Shain (Sandwell College).

Amongst the issues discussed were the changes that people can adapt to in their everyday life, such as recycling and reusing items and using cars less for shorter journeys, as well as a discussion on the urgency of agreeing action at COP26. Those at the Roundtable encouraged the UK to work closely with its allies, whilst making the case to countries more sceptical of the benefits of embracing green technology, as well as encouraging nations like the UK to do more to help developing countries in their fight against climate change.

"We had a very positive discussion on climate change, and it was very interesting to gather the opinions of those who will be keeping a close eye on developments at COP26", said James. "I was really impressed with the positive contributions of the students who attended, they are very engaged with the issue of climate change and were full of ideas and contributions. They are hopeful that agreement can be reached at COP26, and I hope that the world leaders and delegates will be thinking of young people when they meet next week."

Mike Poulton added, “It was really interesting to be part of James’s COP26 Roundtable, as we discussed the responsibility of the delegates and world leaders to decide how to proceed at the Summit. It’s vital that the leaders conserve our green spaces and natural environment, and guide us to living more sustainably and treating everyone fairly. We expect the outcome of the Summit will be clear leadership to achieve these goals, and save the planet for our children and future generations.”

Following the Roundtable, James wrote to the COP26 President Alok Sharma MP, to feed in the views of those present and to wish him and the UK team well for the forthcoming negotiations.

Further details on the COP26 Summit are available at www.ukcop26.org

Let's back our small businesses in 2022

I hope that you were all able to enjoy a relaxing Christmas, and that you received the presents you’d been hoping for!